EM: Welcome to My World, Tara. Thank you so much for stopping by to play twenty questions with me :- )

Before we begin, could you tell us a little about yourself?

TQ: I’m a romance addict who likes to write bite-sized stories with ample helpings of (occasionally kinky) sex. At the time this post goes live, I’ll likely be twiddling my thumbs in a hotel while waiting for our flight to Rome (where all my worldly possessions should have theoretically arrived).

EM: Are you ready to play 20 questions? *rubs hands together*

Which do you find harder to write?

I’ve never published anything in 1st, if that’s any indication…

Male. I constantly show portions of dialogue to my husband and ask: “Would a guy say this?” My most recent direct reference to Lembas (the Elvin bread in Lord of the Rings) caused him to roll on the floor with laughter.

3. Beginning, middle, or end of the story?

Beginning. Chapter 1 is the most painful part. Once I get over the initial hump, the words tend to flow.

Words cannot describe how much I hate synopses.

As a writer, do you prefer:

6. Writing in the morning, afternoon or evening?

My most productive period seems to be between 9AM and 1PM.

7. Writing with music, or in peace?

In peace. I can live with chirping birds, but that’s about it.

Planning. I pre-cast characters and create Scrivener/Storyist outlines. Since I recently wrote three 1-Night Stand stories in a row (all connected to each other), I even created a template.

9. Juggling a few projects, or concentrating on one at a time?

One at a time. Whenever I succumb to the impulse to pursue a side project, I end up trunking one of the two manuscripts.

10. Sticking to one genre, or exploring many?

Since I’m a staunch believer in happily ever afters, I only write romance. However, I’ve written three contemporary romances, two sci-fi romances, a fantasy romance, and three paranormal romances.

As a reader, do you prefer:

11. Story being told from female view or male?

I prefer a mixture of both.

Bad boys (perhaps because my real life hero is such a goody-two-shoes).

While I tend to write heroines who save the day (or the hero, as the case may be), I enjoy reading both types. As long as the damsel isn’t too-stupid-to-live, I can find a way to root for her.

It only now occurs to me that I write quick reads but read longer stories. No idea why.

16. Romance as a side dish or the main course?

17. Erotica or soft romance or something in-between?

Humor. I expect to giggle at least a couple of times over the course of a book.

Oh dear… As a staunch Guild Hunter fangirl, I don’t think I can pick between Dmitri and Raphael.

What are you currently working on?

I just contracted three paranormal romances (all part of Decadent’s 1-Night Stand series), and I should be starting the edits for those later this year. I’m also in the process of revising a Christmas-themed romantic suspense that’s been refusing to cooperate ever since I finished the first draft in January.

Do you have a current release?

I might…. Here’s the thing—since the move made Internet access a bit uncertain, I decided to pre-schedule all my stops for my upcoming release, Operation Owl. To the best of my knowledge (every aspect of the book is done), it should be available some time in July 2014. In either event, I’m giving away a $25 gift card to celebrate its completion.

You can find out how to enter on my website: http://www.TaraQuan.com/Owl OR Here’s the Rafflecopter widget:

And now, a word from my sponsor… 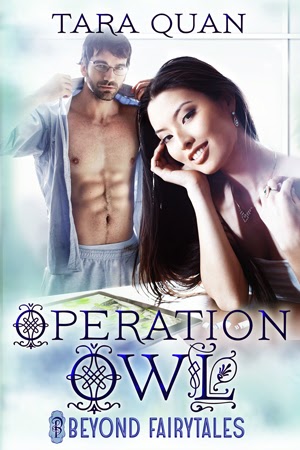 Five years ago, Maya Jain kissed her best friend only to have him run out of her dorm room and leave the state. When he shows up in Washington, D.C., a wanted fugitive sought after by every branch of the US government, she can’t bring herself to ignore his plight. As their physical relationship picks up where it left off, she decides it’s time to make him see her as more than the bespectacled, bookish girl he once called “Owl.”

After being accused of espionage and treason, Zack Strong needs a forensic accountant to help clear his name. Not knowing who he can trust, this white-hat hacker has no choice but to ask his former best friend and math tutor for help. Together they unravel a cyber conspiracy at the Barn, an NSA facility tasked to intercept electronic communications. But as they traverse the nation’s capital to avoid capture, Maya insists on letting their simmering sexual tension take its natural course. Even though he’s never been able to shake the memory of their one kiss, he refuses to let her give up her life for a man with no future.

Hesitating at the threshold of stalker-like activity, the logical part of his brain made one last-ditch attempt to stall his fingers. This wasn’t acceptable behavior, not by any stretch of the imagination. He should wait and see what happened. If push came to shove, he could always abandon his post and knock on her door.

But he’d been sitting there for ages, an abnormal amount of time for anyone to spend in the bathroom. She could have passed out in there, and then where would they be? His brain’s paranoid frontal lobe ended up winning the battle. He needed a quick peek, a brief glance to confirm her location. If the trick gave him a glimpse of her in the shower, the curtain would obscure his view. If he saw even a hint of skin, he’d shut the damn feed off. No harm could come of this.

He accessed her webcam and turned it on. As luck would have it, the computer was angled at the open bathroom door, the only part of her apartment he couldn’t see into from the street. With the wall-to-wall mirror completely visible on screen, it wouldn’t be hard to ascertain her presence. A few keystrokes allowed him to enhance the high definition feed and zoom in. A light coating of condensation blurred the reflection by a fraction, but the open doors allowed most of it to dissipate. The reflected image was clear enough to make out shapes and colors.

The footage presented a profile view of Maya lying in a bathtub. Since he could only make out her face, neck, and left arm, he didn’t see an immediate need to cease and desist. Her head rested against the tub’s lip, cushioned by her long, dark hair. With her eyes closed and lips parted, he couldn’t tell if she was conscious. What if she had slipped in the shower and hit her head?

He cranked up the microphone’s sensitivity. The great thing about modern-day computers was their much-improved capability to process audio and video. As soon as she made a sound or moved, he’d stop watching.

A soft, throaty moan crackled over the speakers. Her left hand lifted in the air before clenching over the side of the tub. Her back and neck arched.

Slapping down his laptop screen, Zack leaned back against the leather headrest and massaged his temples. Struggling not to draw any conclusions, he muttered, “Don’t go there, man. Just don’t go there.” 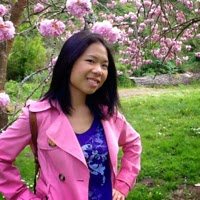 Where can readers find you on the internet?

My website, www.taraquan.com, connects to all my social media haunts. Here are the direct links to save everyone a few clicks.

Globetrotter, lover of languages, and romance author, Tara Quan has an addiction for crafting tales with a pinch of spice and a smidgen of kink. Inspired by her travels, Tara enjoys tossing her kick-ass heroines and alpha males into exotic contemporary locales, fantasy worlds, and post-apocalyptic futures. Armed with magical powers or conventional weapons, her characters are guaranteed a suspenseful and sensual ride, as well as their own happily ever after.

EM: Thank you so much for joining me!

TQ: Thanks for having me over!
Posted by Elizabeth Morgan at 00:07