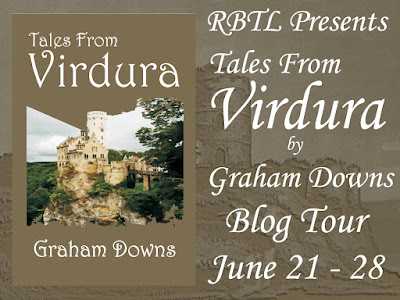 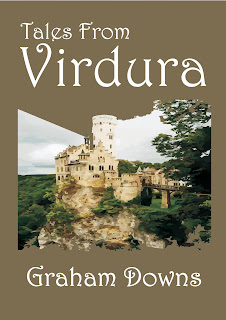 Explore Virdura, a world full of fantasy, magic, and drama.
Find out what happens when a dashing young farmer's son swoops a neighbouring daughter off her feet.
Meet Queen Tricia and the Royal Wizard Solon. Or Queen Celeste, her daughter, as she continues to struggle to come to terms with her new role as queen after the death of her mother.
Or read about Tobin the Bounty Hunter as he takes down Jarvis, a merciless criminal who brutally slit a blacksmith's throat.
All these stories and more await you in Tales From Virdura, a collection of flash fiction stories that take you deep into the world and the lives of the characters who inhabit it.
If you enjoyed reading A Petition to Magic, this might just be your next read.
You'll find out more about old characters and meet new ones. You'll read prequels and origin stories, and you'll read original stories taking place in new locales within the Kingdom.

｟This book can be enjoyed as a companion to, or separate from, A Petition to Magic Book 1 in the Kingdom of Virdura Series.｠

"Stop!"
The lightning bolt dissipated, and the clouds began to clear. Only then did the boys look up, noticing the sudden sunlight pouring down on them.
The boy who had been holding the switch turned.
"It's the Royal Wizard. Run, everyone!"
Within the space of a few heartbeats, everyone was gone. Everyone, that is, except Solon, who was lying face-down in the dust.
His father walked up to him, knelt down and gently grabbed his upper arm.
"Come, my son. It is all right now. They have gone."
Solon allowed his father to help him to his feet, wincing at the pain in his back. The old man produced a handkerchief out of a pocket in his robe and gently dabbed his son's cheek, drying up his tears.
"My son," said the old man, as he looked down at his boy's eyes and smiled sweetly. "I am sorry that you had to go through that. We wizards have always had a difficult time fitting in with our peers."
"But father, why? I just want to be a normal child."
"Because we are different, my son. And people are afraid of people who are different."
"They didn't look very afraid to me!" said Solon. His voice broke a little in anger as he said it, and his hands balled into fists.
"Solon, calm down." Said his father, curtly.
Solon took a step back, shocked at the sudden change in his father's tone.
The old man sighed, deliberately softened his tone, and continued: "You showed great resilience today, and for that I am proud of you. But you almost did something unthinkable. Something that you would've regretted for the rest of your life."
Solon snapped at his father, his voice now a high pitch. "And what would've been wrong with that? I just wanted to teach them all a lesson. I wasn't going to kill anyone. What was the harm in a little lightning storm?"
"But you could have killed people, boy. Perhaps even yourself! I have told you how dangerous and unpredictable magic can be. You are still young, and don't know how to use it properly. But even I, with all my years of training and practice, would balk at attempting what you were trying to do. It is simply too dangerous. Magic should..."
"Magic should only be performed in a calm, private environment, surrounded by the proper tomes and the proper focus," finished Solon, reciting the mantra that had been drummed into his head since before he could talk.
Solon's father smiled. He looked at his son, put both hands on his shoulders, and said, "My son, you are going to make a great wizard, one day. Greater perhaps than even I. But I fear you still have a lot to learn." 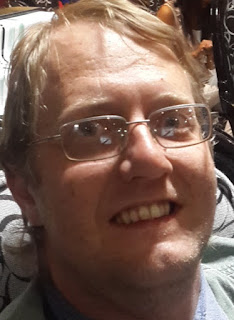 Graham Downs is a South African author. He was born in Alberton, in Gauteng, South Africa, and now lives in Germiston with his wife. Aside from being an independent author, he is a computer programmer in Rivonia.
Since publishing his first book (A Petition to Magic) in 2012, he has published four more, including his latest, Heaven and Earth: Paranormal Flash Fiction. This is a collection of six flash fiction stories, ranging from straight-up horror to downright weird.
Although he has always had a passion for writing, it wasn't until December 2012, at the age of 32 that Downs finally decided to unleash his imagination onto the world at large. The result was A Petition to Magic, a short fantasy story about a wizard who cannot perform magic, and a queen who demands his help.
Following on the success of A Petition to Magic, Downs was asked by fellow author Darren Worrow in 2013, to contribute a story to a charity anthology called I am not Frazzle, benefiting the Devizes Community Centre for Children, in the United Kingdom. He eagerly accepted, and penned Stingers, which was included. The anthology was released in December of 2013. (Stingers was released as a stand-alone story on 16 June 2014.)
While I am not Frazzle was being prepared for release, Downs released his second story, Heritage of Deceit, on 1 December 2013. It's a modern day thriller, and tells the story of a man working in an office, who stumbles across what he believes is a relic from an old genocide.
In October 2014, in time for Halloween, Billy's Zombie was released. It is a very short horror story, about a high school boy whom everyone thinks is a freak. In an effort to exact his revenge on his tormentors, he borrows a book on necromancy from the library, which he successfully uses to raise a zombie from the dead.
Wanting to continue his foray into the horror/paranormal genre, he went on to publish Heaven and Earth: Paranormal Flash Fiction in April 2015. This is a collection of six flash fiction stories in the horror/weird fiction genre.
His newest work is due for release in June 2016, and is now available for pre-order. It's called Tales From Virdura, and it continues the Flash Fiction format. However, he decided to revisit his roots, so to speak, as this collection expands upon the world and characters introduced in his first published story, A Petition to Magic
In addition to his published works, Downs has written many free flash fiction stories and essays, in a wide variety of genres. They're all available for free on his blog. You can also find a monthly crossword puzzle there, sometimes with prizes for solving it correctly. Find both his free writing, and the monthly crossword puzzle, by visiting his Blog.
Graham Downs is always working on new stories, in a variety of different genres, and he hopes to go from strength to strength as he releases better and better writing, and his popularity continues to grow.

Email ThisBlogThis!Share to TwitterShare to FacebookShare to Pinterest
Labels: Feature, Other Authors, Snippets